November is a good month for travelling around Hong Kong. It’s not too hot, the skies are mostly clear, and the time is ideal for doing something out of the ordinary in this town: trekking. Although it might sound a bit strange at first glance: This city at the Pearl River Delta offers wonderful tours on Hong Kong Island, the New Territories and the offshore islands. We selected three of them and gave them a try in November 2009.

The whole MacLahose Trail is about 100 kilometers long and is divided into several stages with different degrees of difficulty. Number 4 is very long and partially very steep but rewards with glorious views. Officially, the route from Kei Ling Ha to Tate’s Cairn is only 12.7 kilometers long, however, it ends in nowhere with another 4 kilometers left to walk on stage 5. The official time designated for this stage is 5 hours. But those who, like us, tend to dismiss time designations and think they can do it in half of the time, be warned! Those who are interested in this route should ask for the free booklet “Great Outdoors Hongkong, Explore the MacLehose Trail” in the tourist office or in the hotel. The booklet does not mention the fact that at the end of the stage, after about 6 hours’ walking, there is neither a bus nor a taxi available. In our case it was nearly dark and we were lucky to be taken along by a taxi that had other passengers in it. Otherwise, it is possible to call a taxi by phone or through the hotel. Alternatively, the route can be followed in the opposite direction; there is a bus service

A trek on Lantau, Discovery Bay to Silver Bay (Mui Wo) 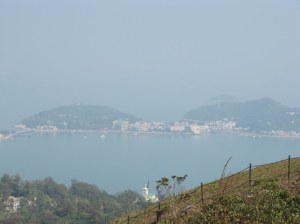 Having arrived in Discovery Bay, Lantau, by ferry after 40 minutes, the first thing you’ll notice is that it is quiet. You’d hardly believe that on this island there is a large international airport and a Disney Land or that you are just coming from a vibrant city with several million inhabitants. In parts of Lantau time is standing still. The way from the Ferry Pier leads in southern direction, along modern houses at first. One gets to the beach, where a path behind the beach leads directly through the dwellings of the people living there. From there the way to Mui Wo is signposted. The way is leading past a monastery high up onto the hills of the island, offering a beautiful view of the China Sea. After 2.5 hours you reach Mui Wo. Using the ferry is a comfortable way to get back to Hong Kong. The trek is described in some more detail with additional photographs at Hiking Hong Kong.

Usually, visiting the Peak is part of every trip to Hong Kong, no matter how short it is. With more or less clear sight, the views of the skyline from up there are incredible. Spending some extra time one can walk around the Peak on a well-signposted trail within 45 minutes. Those who are in the mood can take the turn to Pok Fu Lam Reservoir at the end of Harlech Road. This trail leads through camellia grove with constantly changing panoramic views. Even though there are many crossings on the way one can actually not get lost, as Aberdeen can (almost) always be seen. Having reached Aberdeen after about an hour one can take buses or taxis to go on. We took the bus to Stanley in order to look around there a bit.